I’ve been buying a lot of books lately, so i thought it was about time for another book haul. I’ve read about half of these already because I can’t help it. 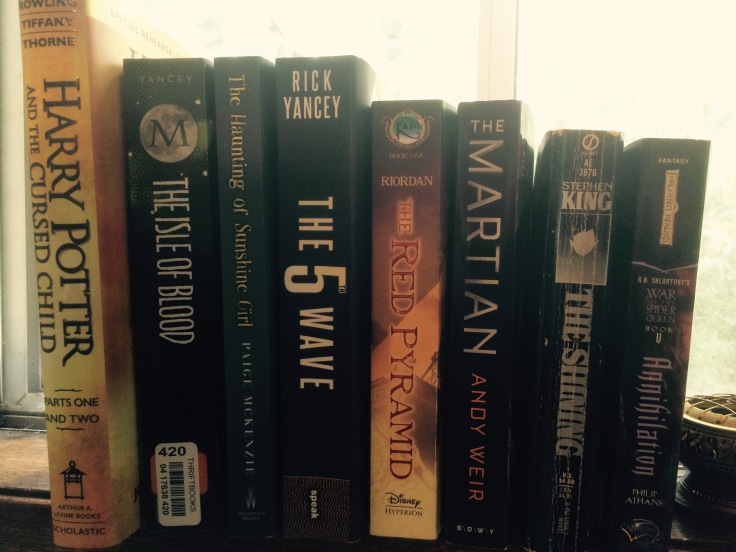 I prefer to buy used books or ones from smaller, discounted stores when possible. This one, however, I was completely fine splurging on. A new Harry Potter book is monumental and I wanted to make sure I was able to read it before it was spoiled for me.

To say I’m excited for this book is a gross understatement. I am a huge Harry Potter fan. I’m talking a Pottermore, Draco-for-Halloween level fan.

Cursed Child is about Harry and Ginny’s son, Albus Severus. It’s about Albus’ struggles with being the child of the chosen one, and there are hints that the Voldemort trouble may be showing up in Albus.

I saw the movie and loved it. My sister says the movie left a lot out of the book, that the book has a bigger focus on the paranormal stuff going on in the hotel (which is my jam). I love Stephen King’s writing style and his advice on writing. I’m excited to finally read some of his fiction.

Dark elves! I absolutely adore dark elves, but they are harder to find in books and movies than their high elf cousins. I like almost all depictions of elves, but dark elves definitely hold a special place in my heart. Imagine my delight, then, when I saw this book in the the fantasy paperback section. I don’t know if it’ll be good, but I’m excited to give it a try.

The Isle of Blood, The Monstromologist Series, Book 3, by Rick Yancey (rating TBD. 5 out of 5 stars for Curse of the Wendigo)

The series takes place in the late 1800s, and follows the adventures of 12-year-old Will Henry, the apprentice to the brilliant but destructive Rick Sanchez-like monstromologist, Pellinore Warthrope. Yancey wrote these before his new series, The 5th Wave, and the tone is entirely different. It’s hard to believe they are written by the same author.

The Monstromologist Series is probably the best series discovery of 2016. I read The Curse of the Wendigo (Book 2) a couple months ago and I could not put it down, and I am eager to read this next one. When I discovered this series at my local book shop, I wanted to read about wendigos, so being the irresponsible reader that I am, I skipped the first book and started with the second. I was not confused at all. These books are well contained and super enjoyable even out of order. They have a level of creepiness, gore, and humor that I haven’t come across in anything I’ve read before and I am hooked.

The Martian is the story of an astronaut who is accidentally left on Mars and needs to find a way to stay alive over a year in a structure that was only meant to last a few months.

I had this book recommended to me and I had been meaning to pick it up and read it. Boy am I glad I did! I’ve never read a book quite like this and I loved it from start to finish. I couldn’t read fast enough. I needed to make sure that Mark Watney was going to be okay.

The Haunting of Sunshine Girl by Paige McKenzie (3.5 out of 5 stars)

This book tells the story of a girl and her mom who move into an old house in Washington state and discover the house is haunted by something nasty. It is based off a Youtube series by the same name.

This kind of story is right up my alley. I love ghost stories. And I enjoyed the book, I really did. That being said, I wasn’t super excited about it. It had some really compelling elements and that climax had me biting my nails. I wasn’t a huge fan of the characters, though I’ll admit they’re growing on me more as time passes.

Two Yancey books on the same list? It’s been a Yancey year. In The 5th Wave, aliens have invaded earth and through a series of four different waves of attacks have nearly eradicated humanity. The earth is at the fifth wave, in which the aliens are starting to disguise themselves as humans to break down the trust among the few remaining humans.

I’m conflicted about this book. Part one, when the main character is hiding alone in the forest and trying to survive and cope with all the psychological stress that comes with it, was fantastic and beautiful. But as soon as other characters start showing up, the genre started changing to a weird mixture of sappy romance and military revolution, which I am into a lot less. But the first part of the book, I enjoyed immensely. I may or may not read the next book.

The Red Pyramid, The Kane Chronicles, Book 1, by Rick Riordan (4 out of 5 stars)

Percy Jackson meets Egyptian mythology! This is the story of the Kane siblings trying to get their father back from the god of evil, Set, while dodging assassination attempts by the House of Life.

This was an enjoyable romp. I’m a fan of the Percy Jackson and the Olympians, and the Heroes of Olympus series’, and this book felt very much like those, except it deals with Egyptian mythology instead of Greek and Roman. It had a few poignant things in it, but over all, it was just a really fun read. I will probably read the next book in the series.

There you have it! Stay tuned for more books, as I do buy more than I probably should and I’ve been reading a lot. What about you? Have you read anything good lately? I’ve been really getting into paranormal and scary books. Let me know in the comments if you have any recommendations!